Las Fallas is the most Valencia tradition and it is well known that a big help to learning a lenguage is immersin yourself in the culture. So if you are in Valencia and you want to learn Spanish, there is really no better way to start then by attending to some of these fallas events. 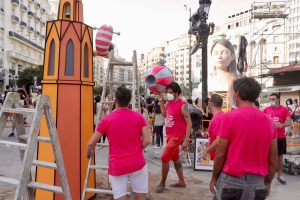 This happens the 15th of March and marks the official start to fallas. Plantà just means that the fallas monuments have to be standing by that evening, so on the 16th you’ll be able to see all the monuments in all their glory. 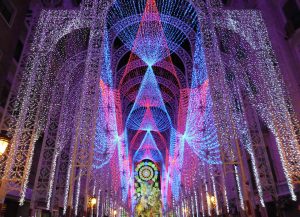 During fallas there are more things to see than the fallas themselves. Apart from the awards for the most beautiful fallas, there are also awards for the most beautitully lit streets in Valencia. These lights will be on every night from the 8th to the 19th of March, so there is plenty of time to go see them. The only falla that offers a pirotechnich-musical show is the Avenida Malvarrosa-A. Pérez Cavite Falla.

The mascletà takes place every day at 14:00h from the 1st to the 19th of March in the Plaza del Ayuntamiento de Valencia. It’s a pyrotechnic show that includes lots of gunpowder, noise and smoke and is a must in your fallas itinerary. 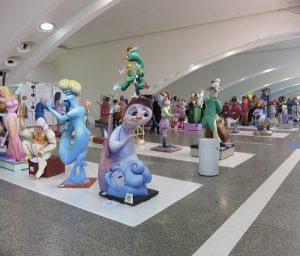 You can find this exhibition in the Museo de las Artes y las Ciencias from February 3rd to 15th of March, where you’ll be able to see the ninots (fallas pupets) that were chosen to be saved from the flames. 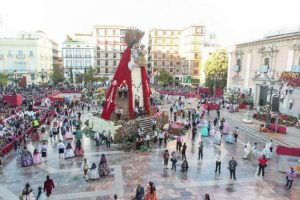 The 17th and 18th of March, all the falleros and falleras circuit the city in their traditional gowns with a buquet of flowers. This circuit ends in the Plaza de la Virgen, where the flowers become part of the offering to the Virgen de los Desamparados (The Virgin of the Helpless), the city’s saint patron. This is one of the most emotional events of the fallas and probably the most beautiful. 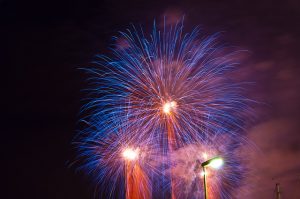 The firework displays happen every night during the fallas week at 00:00h in different locations. The Nit del Foc, however, takes place on the last night of fallas (the 18th of March) at 01:30h and is the biggest one, which marks the end of the festivities.

This one is for the party animals. During fallas there are several street verbenas, which include bands, mobile discos and street food. These can be found all around the city. There are also several concerts that take place during this week. 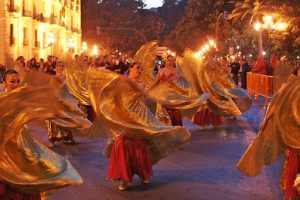 The Cabalgata del fuego (the Fire Parade) takes place the 19th of March at 19:00h. This is a parade in celebration of fire, since it takes place the same day when the fallas will be burnt down. There are carriages, giant mechanisms, people in costumes, gunpowder, music and lots of fun. 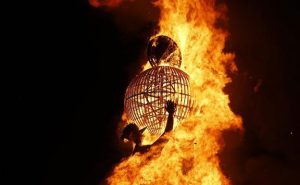 Fallas come to an end with the cremà, which is when the fallas are burnt down. It starts the 19th of March at 22:00h with the burning of the children’s fallas. At 00:00 begins the burning of the big fallas. This is the most emotional event of them all, since it marks the beginning of that year’s festivities.