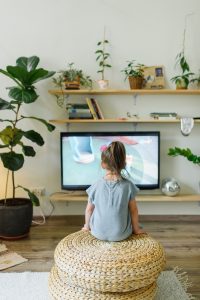 We have found this YouTube channel called Habla con Eñe – Aprender español y cultura, that has a sitcom series to help you with that. This Series is completely in Spanish and each chapter is dedicated to a certain topic like introductions, greetings, nationalities and countries, but with a fun spin to it. The series starts at a beginner level (A1/A2) and slowly increases its level and the videos are around 4 minutes long, so you can practice a bit every day. This channel also has other videos about Spanish and Spanish culture that can be very helpful.

Here is the first episode of the series called Spanish Sitcom.

Another similar YouTube channel is “Spanish Playground”. They also have a series called Buena Gente that was created to help you learn Spanish. The actors make sure to talk slow and clear, to help you understand everything they say and the videos have subtitles in Spanish, to help you even further. However, this series is created in South America and while they do speak Spanish, there are some differences with the Spanish spoken in Spain. That is something you will have to keep in mind if you want to watch this series, since some of the vocabulary and pronunciation will be different from the Spanish you are used to hearing here.

Here is the first episode of the Buena Gente series.

Photo by Ksenia Chernaya from Pexels

SPEAK TO YOURSELF IN SPANISH TO ACQUIRE FLUENCY

BENEFITS OF LEARNING SPANISH FOR YOUR HEALTH